In 1960, “La Dolce Vita” was released and would become Federico Fellini’s most successful film. It signaled his deepening break with Italian Neo-Realism, an association established when he scripted “Rome: Open City” for Roberto Rossellini in 1945. If the Neo-Realists thought he had only veered away from their movement, they could not have been prepared for his next film, “8½,” the tale of a director in crisis whose dreams, visions and fantasies propel him through a psychological and spiritual minefield of memories, desires and regrets. 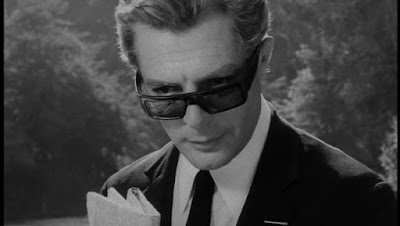 Guido is the director dealing with more than one crisis. Inspiration for the film he is about to shoot has escaped his grasp. His marriage is nearing the rocks. His extra-marital affair has lost its excitement and left him with an uneasy sense of guilt. He has arrived at the gates of midlife without the keys to his identity or purpose. He is a walking question mark, going through the motions, keeping up appearances with a sardonic smile masking a fear of impending failure. 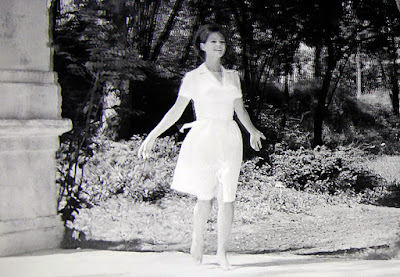 The Woman in White

Guido is Fellini. Fellini is Guido. “8½” is about the making of “8½.” It is about the moment the filmmaker gained the insight and inspiration to make his eighth and a half movie. Until then, he had directed seven features and a short film for part of an anthology, which he counted as one half. The result is perhaps the most the most expensive and public act of self-analysis ever committed; a high-wire act of confession that could only be presented through storytelling. 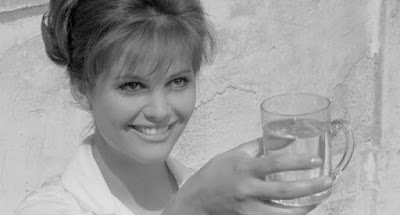 And that is where, once again, this self-propelled enigma resists being broken down into categories and acts. There is no rule that says every story must have three acts, although almost all of them do. Even those that flirt with experimental structures of time, place and the random order or dis-order of events, eventually reveal a beginning, middle and end hiding behind all the trickery. But here, there is no answer to questions of standard structure or the breakdown of story into an orderly system of acts and plot points. Three days pass chronologically at a high-class recovery retreat while our protagonist has multiple flights of fancy and streams of consciousness divided by scenes taking place in the real world. 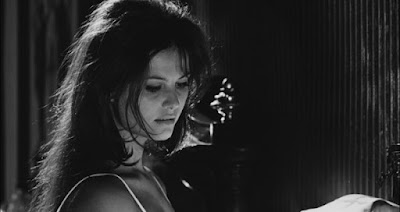 Instead of three acts, it is a single, movie-length statement of one man’s confusion with the answer to his dilemma arriving just a few minutes before the end credits roll. In fact, Fellini’s original title was, “The Beautiful Confusion.” There is a thread, however, an anchor to the story if you will, of a woman who shows up as a recurring figure. 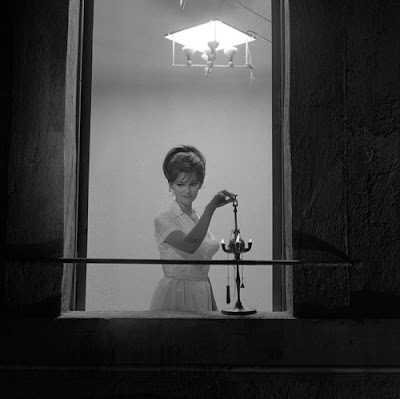 Guido’s first waking vision of her is of a Woman in White. She glides into view at the Springs, where healing water is dispensed to waiting lines of the infirm, the elderly and members of higher society who wish to be seen at the fashionable spa. Guido stops, in a silent interlude, and watches as she fills a glass and holds it up to him. She is offering a cure for his anxieties and physical distress. The image fades quickly, replaced by an impatient attendant dispensing the water. 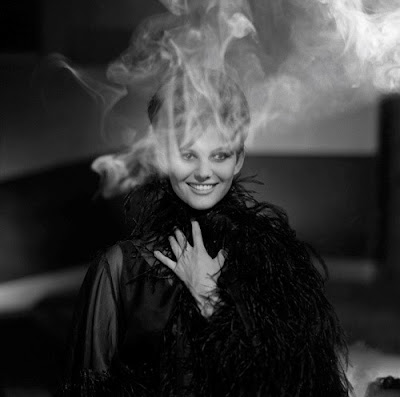 She appears again, in a dream, bringing him the promise of physical love. She moves around his bedroom as he sleeps, finally coming to the bed and kissing him gently on the forehead. 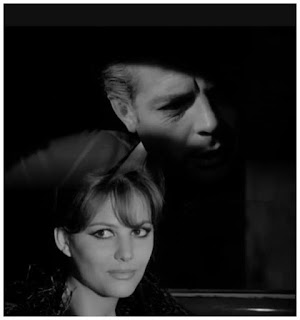 A Drive to the Springs

An agent for an actress named Claudia has been pestering Guido several times throughout the film as to whether he will make a commitment to a part for her. He says that she has many offers and can’t wait much longer for Guido to decide. With less than 20 minutes left in the movie, Claudia shows up in person. It is actress Claudia Cardinale, playing the role of Claudia, aka the Woman in White. Except when she finally arrives in the flesh, she is dressed all in black, framed by a neckpiece of midnight-ebony feathers. 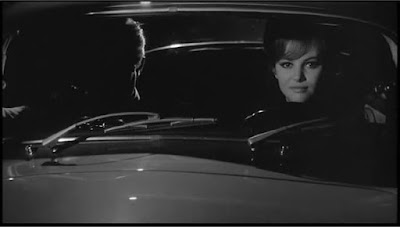 The Director in Shadow

She drives Guido to the Springs, with him shrouded in shadow and her in the light. In their six minutes of scenes together, she gets him to admit there is not going to be a film and that he has lost everything, including his self-confidence. He talks about the confusion of his main character, how he can’t revive his creative spark. She then becomes what he wasn’t expecting: the bringer of truth. 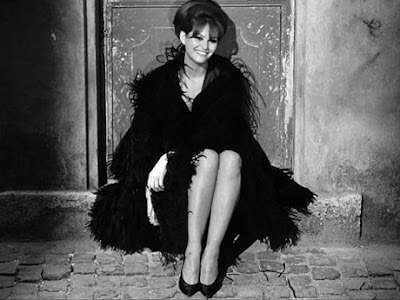 The Bringer of Truth

She says, “Because he doesn’t know how to love.” She says it three time in succession in reply to each of his final attempts to justify his dilemma. Whether it’s the Candyman, Beetlejuice or St. Peter denying Jesus three times before the cock crows, words or phrases in three repetitions appear to have magical powers. This is the turning point which allows for the resolution in the final moments of the film. It’s the prompt Guido needs to make his final decision, which eventually results in a self-realization and a rebirth of spirit. 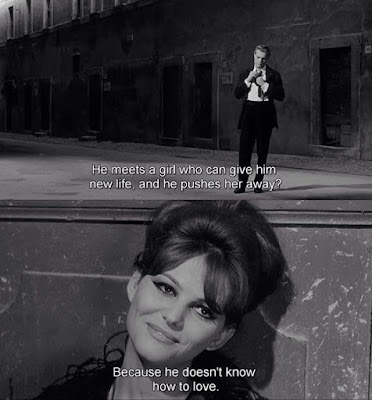 Call it a plot point if you wish. In this uniquely structured film, it is the end of a very long first act, leading into an extremely short final act. The end of a Beautiful Confusion.